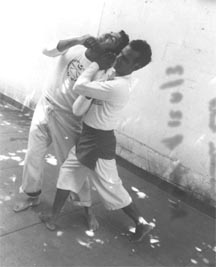 Hi. My name is Phil and I’m a group leader. (Response: Hi Phil!)

Regardless of reasons, one of the side effects is that I have a huge library of DVD’s—many of them are silat, but there are representatives from just about everything. And as I watch these videos and the movements they train, something keeps showing up over and over again—the counters take too long.

If anyone reading this needs any help defending themselves from someone who throws a single punch and stands there, let me know, because I have an extensive library of techniques in my DVDs that apparently have been built for that exact situation. But virtually all the things these instructors train you to do would come up short as soon as the other guy throws that second punch, charges forward, moves, or in many cases even bothers to retract his punch. Many martial arts instructors will say things like, “Now, your opponent isn’t going to let his arm hang out there…” but will still follow this up with a response that doesn’t anticipate that the initial strike is already done and strike #2 is on the way.

My simple sniff test is this: whatever you are training to do in response to a punch, would you complete it before a second punch could be thrown? If the answer is, “No,” then what you’re training probably is not realistic. It may be effective in training, and it may be devastating if you actually pull it off, but if that second punch can come in before you can finish your response, it’s a very risky, low percentage move.

PSP takes this combat reality into account from the ground up. Our entries train us to evade an attack, get into close range, and counter attack almost simultaneously. The reason this is important isn’t because it’s theoretically the most devastating thing you could conceivably do; the reason it’s important is because you don’t have enough time to do anything else. If what you do can’t be compressed into the timing of a single attack from your opponent, it takes too long to rely on.

I don’t have time, for instance, to block or parry a punch, and then attack. At the time I’d begin my counterattack, my opponent is beginning their second attack. Best case scenario, we hit each other. Whatever I do has to bridge the timespan of their single attack, and that’s why we train the way we do. That’s why those simple, basic entries are pretty genius.

Are PSP entries the only combat-effective response to an attack? Of course not. There are other kinds of techniques that could be compressed into that same time frame. You could also do something to give yourself a bigger window of time like do something massively disruptive to your opponent or lengthen the range.

But whatever you do in response, it has to fit very closely to the timespan of your opponent’s attack, because no matter what style you study, or what techniques you prefer, you can’t change the laws of physics.

Research Survey on Self Protection